The Houndé South properties are located in the southwestern region of Burkina Faso, West Africa. The property area is accessible from the capital city of Ouagadougou via paved National Route 1, a distance of about 400 km. Access is also available from Bobo-Dioulasso, Burkina Faso’s second largest city, on National Route 1 for 90 km. A network of roads and trails which were locally upgraded or built by Avion Resources, provides access to the various parts of the permit. 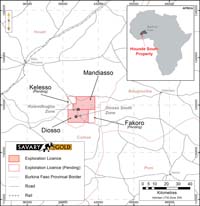 Savary Gold, through a wholly-owned subsidiary, has an option to earn a 100% interest in the Houndé South Property from Endeavour Mining Corporation. In order to exercise this option, Savary must spend US$3 million in exploration within two years of the date of the option agreement and issue 19.9% of its outstanding shares to Endeavour. 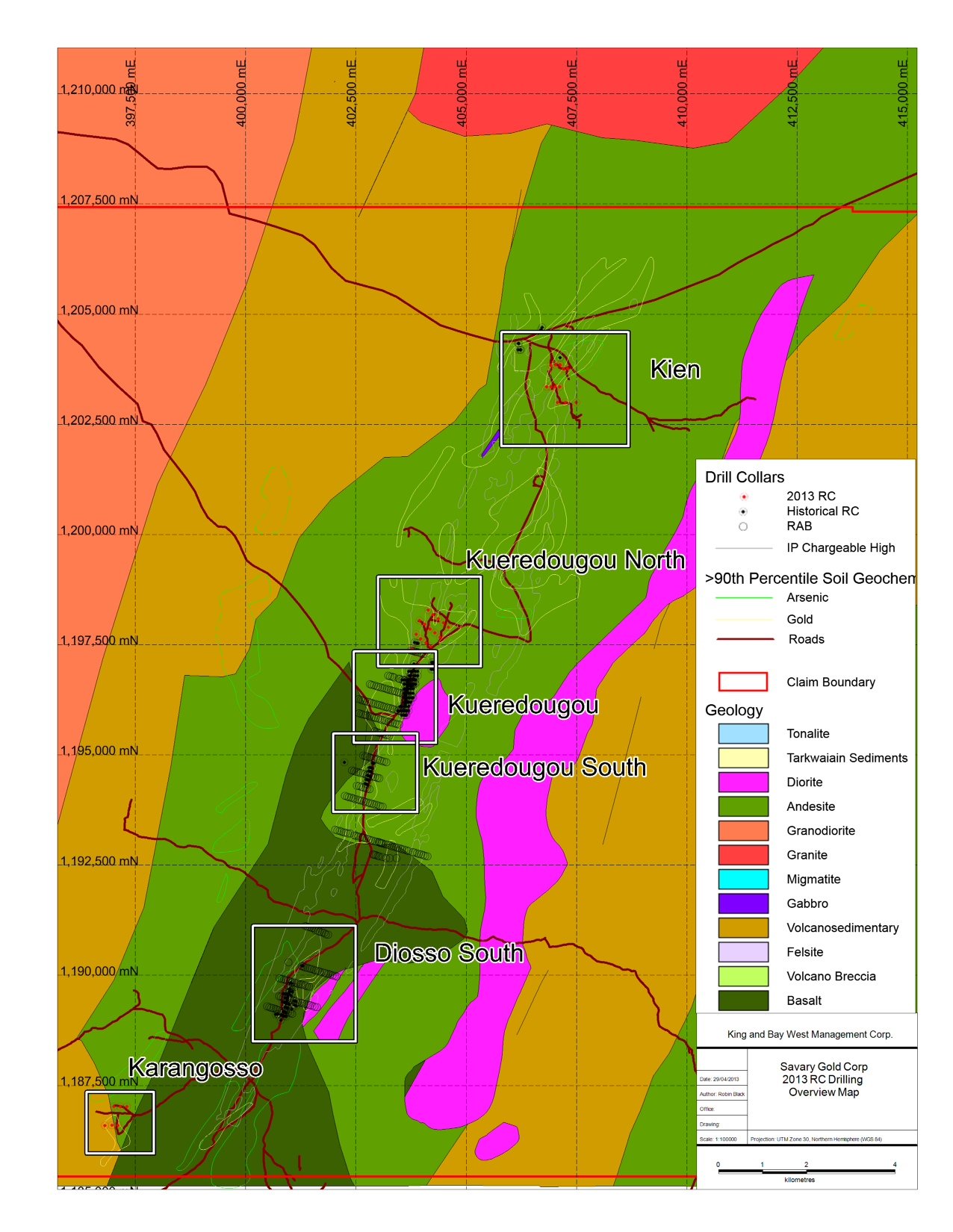 In April of 2013, Savary completed a 35-hole reverse circulation (RC) drilling program totaling 3,470 meters, which was part of a $1.5 million program aimed at investigating a number of high priority targets along the north-northeast trending Ouango-Fitini Shear zone. Results from this limited program are very encouraging, with two new zones of significant mineralization identified in the Kien and Karangosso areas.

The first phase of this drilling program, which totaled 2,709 meters, was completed in December 2012 and focused on the Kueredougou and Diosso South zones. See news release dated January 23, 2013 for details and click here for 2012 assay results table.

These two new mineralized zones, Kien and Karangosso, along with the previously known Kueredougou and Diosso South zones, demonstrate the considerable economic potential of the mineralization contained within the Houndé South property.

The results from the current program will be analyzed in conjunction with historical drilling programs, as well as geological mapping and geophysical surveys in order to plan the next phase of exploration.

From 1999-2001, the Diosso permit was held by a joint venture between Shield Resources Burkina Faso SARL and Delta Gold Australia, who conducted regional and semi-detailed soil surveys, rotary air blast (RAB) drilling in 258 holes, and 3,666 m of RC drilling in 56 holes. The permit was subsequently acquired by Resolute West Africa and Goldbelt Resources West Africa from 2005 – 2008, who conducted 2,438 m of RC drilling in 25 holes.

From 1997-2000, the Mandiasso permit was also held by a joint venture between Shield Resources and Delta Gold. Detailed soil surveys and RAB drilling with 42 holes were conducted. The permit was subsequently also acquired by Resolute and Goldbelt from 2005-2008, who conducted 5,242 m of RC drilling in 67 holes.

In 2010, Avion Gold Corporation acquired the Houndé Property. During 2010 and 2011, both airborne and ground geophysical surveys, soil geochemistry and drilling were carried out over the Houndé South concession blocks. Avion drilled a total of 12 diamond drill core holes totaling 2,126 m. The Diosso South zone returned intercepts of up to 2.18 g/t Au over 8.5 m. Holes that tested the Kueredougou zone included up to 21.13 g/t over 3.97 m. The magnetic data suggests the major geological units trend NNE.

The geology of West and Central Africa is dominated by Precambrian shields or cratons of Archean and Lower Proterozoic age, Pan-African mobile zones of Upper Proterozoic age and intracratonic sedimentary basins ranging from the Proterozoic to the Quaternary. Within Burkina Faso, a Paleo-Proterozoic (Birimian) basement underlies most of the country, which is intruded by large batholiths of Eburnean granitoid.

The Proterozoic greenstone belts of West Africa are also known as Birimian greenstone belts and encompass a vast area of approximately 350,000 km2. In Burkina Faso, the Birimian greenstone belt hosts a number of operating gold mines including SEMAFO’s Mana Mine, with reserves totaling 1,984,600 oz of gold Proven and Probable, 2,790,500 oz Measured and Indicated, and 2,082,200 oz Inferred. Other nearby gold deposits include Endeavour's Houndé Project (which includes the Vindaloo zone) and Sarama’s South Houndé Project, located adjacent to Savary’s property.

The properties lie within the Houndé greenstone belt, a package of NNE-SSW trending volcano-sedimentary rocks roughly 330 km long by 60 km wide. There are several gold zones within the South Block tenements including Diosso South, Kueredougou and Kien.

The Diosso South zone is located 500 metres west of a main, gold-bearing, N015-trending high strain zone, a branch of the Ouango-Fitini Shear Zone (OFSZ) that runs along the western Houndé greenstone belt. Dubbed OFSZ-1, it crosscuts the entire Houndé South permit group. Historic drilling in the Diosso South area indicates discontinuous lenses that are exposed over a minimum strike length of 800 m. The zone has been traced to a maximum depth of about 140 m and is open to depth and along strike. Gold zones intersected in drilling by Avion Gold Corp. in 2010 varied from 3.32 g/t Au over 0.35 m up to 1.0 g/t Au over 12.2 m core length. The Diosso South zone appears to be part of the same shear zone system that hosts the Kueredougou zone located approximately seven km to the north-northwest.

The Kueredougou zone is situated next to the OFSZ-1. Historic drilling indicates two closely spaced sub-parallel mineralized zones. The eastern branch is wider than the western branch and was tested historically by drilling over a minimum strike length of 900 m. The western branch was drill tested historically over a minimum strike length of 1,500 m. Avion drilled the eastern branch in 2010 with four holes totalling 740 m. Several significant intersections were reported ranging from 1.1 g/t Au over 2.7 up to 21.1 g/t Au over 4 m core length.

The Kyen zone is hosted by narrow quartz veins in a massive mafic volcanic host, however there is very limited information on this zone. A good correlation exists between the IP anomalies (chargeability, resistivity), orpaillage workings, soil geochemistry and K (K alteration) airborne anomaly.